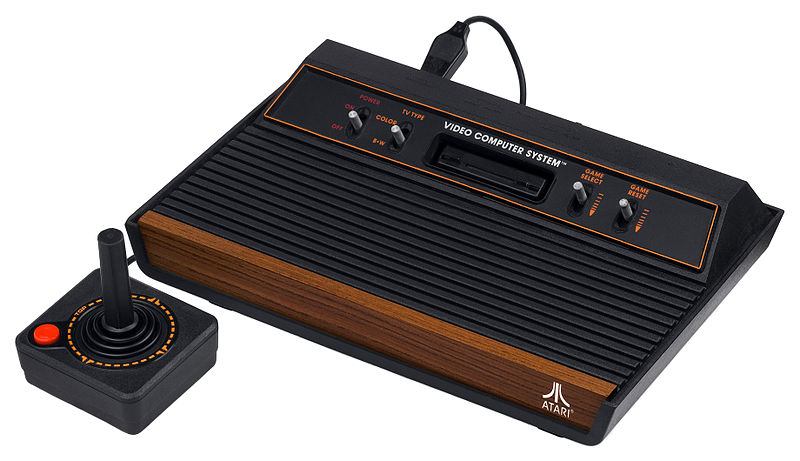 A collection of hacks, mods, and rebuilds of Atari 2600 games, usually adding difficulty or unusual aspects.

Collections of simple demonstrations of manipulating the Atari 2600 for various effects. Rarely full programs or games.

Halo 2600 is an action-adventure video game developed for the Atari 2600 video game console, inspired by the Halo series of video games. The player uses the joystick to control the character of Master Chief as he makes his way through 64 screens, divided into four zones: outdoors, Covenant base, ice world, and a final boss area. Weapons and power-ups are available to combat the many enemies that appear. The player and enemies can each be killed by one hit unless a shield is collected. There are...
favoritefavoritefavoritefavoritefavorite ( 1 reviews )

Pitfall! is a video game released by Activision for the Atari 2600 in 1982. It is the second best-selling game made for the Atari 2600 (after Pac-Man), with over 4 million copies sold. The player must maneuver a character (Pitfall Harry) through a maze-like jungle in an attempt to recover 32 treasures in a 20-minute time period. Along the way, he must negotiate numerous hazards, including pits, quicksand, rolling logs, fire, rattlesnakes, scorpions, and crocodiles. Harry may jump over or...
favoritefavoritefavoritefavorite ( 14 reviews )

Based on the fictional retro arcade game featured in the 2012 Disney animated film Wreck-It Ralph, Fix-It Felix Jr. draws inspiration from Donkey Kong and other arcade classics in its defictionalized arcade cabinet. After having his stump moved by a construction company, Wreck-It Ralph seeks revenge by damaging the apartment building built on his land. The citizens of Niceland call on Fix-It Felix Jr. and his magic hammer to repair the damage Ralph is dishing out and force him off the building,...
Topics: Fix-It-Felix, Atari 2600

In 1981, a sequel to Pac-Man  was introduced in the form of his girlfriend,  Ms. Pac-Man . This sequel continued on the "eat the dots/avoid the ghosts" gameplay of the original game, but added new features to keep the title fresh. Like her boyfriend, Ms. Pac-Man attempts to clear four various and challenging mazes filled with dots and ever-moving bouncing fruit while avoiding Inky, Blinky, Pinky and Sue, each with their own personalities and tactics. One touch from any of these...
Topics: Pac-Man, Ms. Pac-Man, Atari 2600

Custer's Revenge is a controversial video game made for the Atari 2600 by Mystique, a company that produced a number of adult video game titles for the system. The player character is based on General George Armstrong Custer. The game was first released on October 13, 1982, and has received significant criticism because of its crude simulation of a rape of a Native American woman. In the game, the player controls the character of Custer, depicted as a man wearing nothing but a cavalry hat,...
favoritefavoritefavorite ( 6 reviews )

Ixion is a port of the unreleased 1983 Sega coin-op of the same name, Ixion is an interesting game that doesn't seem to play like anything else in the 2600 library. Your goal in Ixion is to grab the five white squares scattered across the screen and spell the word Ixion before your time runs out. At the start of each level only certain squares are visible, and to get around more easily you must first reveal the missing squares. To reveal the missing squares, the player must move a brown sphere...

Mario has kidnapped Junior's Papa! Donkey Kong Jr.  was originally released in the arcades in 1982 as a sequel to Donkey Kong. In this game, Mario plays the antagonist, finally having captured Donkey Kong, and has put the ape in a locked cage. As Donkey Kong Jr., players will have to make their way through four different levels (Vines, Springboard, Chains and Mario's Hideout) in an attempt to find keys to free the little monkey's father. Along the way, Mario will send out Snapjaws, swooping...
Topics: Nintendo, Donkey Kong, Atari 2600

Jr. Pac-Man  features gameplay similar to the original Pac-Man , but with a few changes. As Jr., you need to eat all of the dots in a maze without running into the four ghosts that are trying to get you. The maze is now much larger, and no longer fits on a single screen. The maze will scroll around to follow the action. From time to time a tasty bonus will bounce around the screen which can be eaten for extra points. There are tricycles, kites, drums, balloons, trains, root beers, and other...
Topics: Pac-Man, Jr. Pac-Man, Atari 2600

Dig Dug  is a 1-2 player arcade game in which you have to use your shovel to dig your way through the earth. Stopping you from doing this are two monsters, called Pooka and Fygar, who will continually chase you around. The only weapon that you carry is an air pump, which you can use to inflate the monsters to the point where they explode. (if you start to inflate them but stop doing so, the monsters will get turned back to their normal selves). Furthermore, rocks are scattered throughout the...
Topics: Dig Dug, Atari 2600

Q*bert  is a popular arcade game. The goal is to change all of the tiles on a pyramid to the target color. To do this you guide Q*bert around the pyramid, and every tile he hops on will change color. On early levels, a single hop will change the tile to the desired color, but on later levels you may need to hop on a tile multiple times or even avoid hopping on a tile multiple times! Trying to stop Q*bert are many different creatures which wander around the board, including Coily the snake,...
Topics: Q*Bert, Atari 2600

Garfield is a Side-Scrolling Platformer video game for the Atari 2600 that Atari planned, but cancelled because of the videogame crash of 1983. In the game, players help Garfield get around the neighborhood, eating hamburgers, catching Nermal, and avoiding Odie and flying flowerpots. According to the Atari Protos website, the game perhaps would have been the largest Atari 2600 game if it had not been cancelled. The site also states that the game's producer has the only copy. However, the ROM...
favoritefavoritefavorite ( 1 reviews )

Click here to view the manual for this game. Alien is based on the classic thriller film of the same name, although you'd be hard pressed to recognize it if not for the cart label with its artwork depicting the movie. Fox Video Games basically took the movie and translated it into game action through a maze format that's very reminiscent of Pac-Man. The maze is supposed to represent the inside of a spaceship that has been infested with alien beings. Adult aliens are loose in the ship, laying...

The  32 in 1 cartridge  was Atari's second attempt to make a multi-cart for the 2600. Their first attempt (the 4 in  1 ) never got past the prototype stage before Atari decided that four classic titles on  one cartridge  weren't enough to entice frugal gamers into buying ten year old games.
Topic: Atari 2600

Click here to view the manual to this game. In 1978 John Carpenter terrified movie audiences and gave birth to the slasher genre with Halloween, an independent film following the blood trail of Michael Meyrs, psychotic serial killer being hunted by his psychiatrist, Dr. Lumas (Donald Pleasence), as he slaughters his way to innocent teenage babysitter Lori Strode's (Jamie Lee Curtis) life. Five years later, Charles Band, the owner of home video distribution company Wizard Video, got his hands on...

Click here to view the manual to this game. Frogger is an arcade game introduced in 1981. It was developed by Konami, and licensed for worldwide distribution by Sega/Gremlin. The object of the game is to direct frogs to their homes one by one. To do this, each frog must avoid cars while crossing a busy road and navigate a river full of hazards. Skillful players may obtain some bonuses along the way. The game is regarded as a classic from the golden age of video arcade games and was noted for...
favoritefavoritefavorite ( 3 reviews )

Chase the Chuck Wagon is a 1983 promotional video game distributed by Purina for the Atari 2600/VCS home console. It was available only via mail order by sending in proofs of purchase to Purina. In the 1970s and 1980s, popular television commercials for Purina dog food included a dog chasing a tiny chuck wagon. The gameplay is loosely based on this premise. Chase the Chuck Wagon is a maze game. The object of each maze screen is to move Chuckie, the dog, through mazes of four different designs...

In this game, you are Leatherface. Some tourists have trespassed onto your land. They have been mostly eliminated but a few remain. The object is to chase down the remaining tourists and kill them. You chase the tourists with your chainsaw. When you get next to them, you press the fire button to rev up your saw and make cold-cuts out of them. Try to avoid obstacles like hedges, fences, cow skulls and wheelchairs. Try not to rev the chainsaw unnecessarily as you only have 3 tanks of fuel and...

(Summarized from the manual) You are an Ewok in the hang glider corps. Your mission is to destroy the Imperial shield generator. You must avoid enemy fire, get rock piles and explosives to use against your enemies, and then fly through the doors of the shield generator bunker to blow it up. You fly your hang glider with the joystick. You can tell your altitude by how far you are above your shadow. Left is bank left, right is bank right. With difficulty switch A in the "B" position,...
favoritefavoritefavoritefavorite ( 2 reviews )

Click here to view the manual to this game. Star Wars: The Empire Strikes Back is a scrolling shooter video game published by Parker Brothers in 1982 for the Atari 2600 and in 1983 for the Mattel Intellivision. It was the first Star Wars video game. In the game, the player controls a snowspeeder to battle against Imperial AT-AT walkers on the planet Hoth. The goal is to hold off the walkers as long as possible before they blow up the power generator at the Rebels' Echo Base. The difficulty...
favoritefavoritefavoritefavorite ( 6 reviews )

Boxing is an Atari 2600 video game based on the sport of boxing. The game was designed by Activision programmer Bob Whitehead. Boxing shows a top-down view of two boxers, one white and one black. When close enough, a boxer can hit his opponent with a punch (executed by pressing the fire button on the Atari joystick). This causes his opponent to reel back slightly. Long punches score one point, while closer punches (power punches, from the manual) score two. There are no knockdowns or rounds. A...
favoritefavorite ( 2 reviews )

Click here to view the manual to this game. E.T. the Extra-Terrestrial (also referred to simply as E.T.) is a 1982 adventure video game developed and published by Atari, Inc. for the Atari 2600 video game console. It is based on the film of the same name, and was designed by Howard Scott Warshaw. The objective of the game is to guide the eponymous character through various screens to collect three pieces of an interplanetary telephone that will allow him to contact his home planet. Warshaw...
favoritefavoritefavoritefavorite ( 2 reviews )

Snoopy (AKA Snoopy and the Red Baron) (Digivision)

Be sure to read the JSMESS FAQ if you have questions about the in-browser emulator and the technology behind it.

The Atari 2600 is ironically somewhat difficult to emulate quickly, so a fast machine is a big help. It is also suggested you use the Firefox browser to run the emulator.

Here are the highest rated Atari 2600 cartridges in this collection: Frogger, River Raid, California Games, Chopper Command and Dragonfire. Please be aware that there were many not-excellent cartridges produced for the Atari 2600 and some of the games should be observed but moved on from pretty quickly.

Through use of the JSMESS emulation system, the following cartridges are playable at the Internet Archive.

These cartridges are currently viewable only as image and video presentations at the request of Atari, Inc.